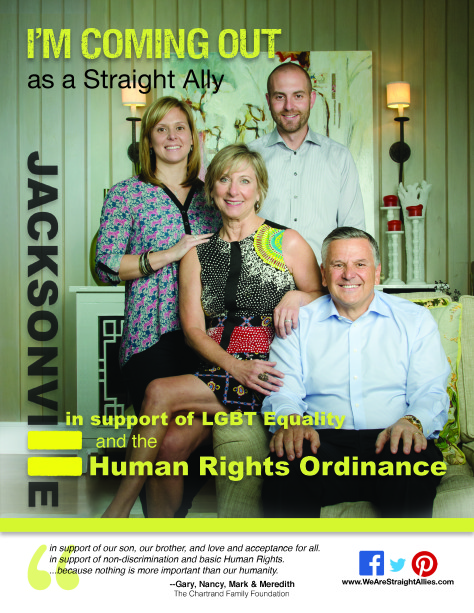 The Chartrand Family proudly joins the “We Are Straight Allies” campaign in support of their son and brother, Jeffrey, and for the entire LGBT community. In their own words, they describe the importance of why they are ‘coming out’ as allies:

We joined this movement as a family to send an intentional message regarding family acceptance, love, and support for LGBT families. Family rejection is one of the biggest issues contributing to LGBT youth homelessness and drug abuse. According to the National Alliance To End Homelessness (NAEH), roughly 1 in 5 youth who are homeless self-identify as lesbian, gay, bisexual, transgender (LGBT). LGBT youth are more likely to run away from home or be rejected by their families if family members have difficulty accepting their sexual orientation. Once homeless, LGBT youth face disturbingly high rates of physical assault, sexual exploitation, and mental health problems.

Our son and brother, Jeff, identifies as a gay man. We were unaware of the suffering Jeff experienced growing up in Jacksonville but have learned that his suffering was most caused by the messages that were sent directly and indirectly to him about who he was and is. He was not protected then and is not protected now.

We joined this effort to pass the Human Rights Ordinance on behalf of human rights, human dignity, and equal rights for the LGBT community. Not additional rights, not different rights just equal rights. The decision whether or not to pass a Human Rights Ordinance is to decide whether we are humanizing or dehumanizing the LGBT community or more simply are we treating people with the dignity and respect that they deserve?

We invite the larger Jacksonville community to break through fear, silence, despair, complicity, and indifference and follow the truth by joining in the struggle for justice for all our LGBT brothers, sisters, sons, and daughters. We need to speak out publicly, become engaged for what is right. Equal rights for all is the only way of correcting this injustice.

We love this city and it is our hope that together we can send the message of love and acceptance to all who reside here.

Gary Chartrand is the Executive Chairman of Acosta, a leading full-service sales and marketing agency, providing to manufacturers in the consumer packaged goods (CPG) industry. He has been the pivotal force behind quadrupling the company’s geographic coverage, transforming Acosta into a leading full-service sales and marketing company in the U.S. and Canada. Gary received the Ernst & Young Entrepreneur of the Year Award for the State of Florida in May 2001 and has been an extraordinary leader in his industry and his community. From 2003 to 2009 Mr. Chartrand was recognized as one of the 50 most powerful leaders in the grocery industry by Supermarket News.

Mr. Chartrand also has a passion for educating our children in Duval County. In April 2007, he led a community effort to help bring Teach for America to Jacksonville. Jacksonville was the second city in Florida to have attracted Teach for America to its community. Because of his passion for education, coupled with his business and leadership experience, Mr. Chartrand was appointed to the State Board of education in 2011.

Gary currently serves on the Board of Directors for the Tom Coughlin Jay Fund Foundation; St. Vincent’s Hospital, The Jacksonville Public Education Fund, and a director on the board of the KIPP schools in Jacksonville, FL. He previously served as a member of the Board of Directors for the I. M. Sulzbacher Homeless Center in Jacksonville. Gary is actively involved in raising funds for The Wounded Warrior Project, headquartered in Jacksonville. He is also an enthusiastic supporter of the Catholic Charities, Guardian of Dreams Catholic schools, and the Diocese of St. Augustine.

Gary is a graduate of the University of New Hampshire. He resides in Ponte Vedra Beach with his wife, Nancy. They have two children, Jeffrey and Meredith.

Born Nancy Jane Piecuch in 1954 to first-generation Polish immigrants, Frank and Jane Piecuch. Nancy’s birthplace and home was Manchester, New Hampshire where her value of volunteerism took hold. She graduated from the University of New Hampshire with a Bachelor of Science and teaching degree. In 1982, the Chartrand family migrated to Jacksonville, Florida where they have made their home. Continuing with the values instilled in her during childhood, Nancy served on the Parent Teacher Associations at her children’s schools and the family’s local parish, Resurrection Church. Her devotion to the Catholic faith has inspired a deep belief in social justice.

She has served throughout the community on numerous boards including The Ronald McDonald House, St. Vincent’s Hospital. PACE School for Girls, and Birthright, Inc. Currently, Nancy sits on the board at PACE, St. Vincent’s Healthcare Foundation where she is the chair of the cultivation committee, and Chairman of the Board at The Chartrand Foundation which focuses on equal opportunities for all.

Their daughter, Meredith graduated from Florida State University in 2003, where she earned a Bachelor of Science degree in Family and Child Sciences. After graduation, she moved to New York City, where she taught art at a Montessori school. In 2006, Meredith moved back to Jacksonville to help to improve the lives of Jacksonville’s children and work with her family to establish The Chartrand Foundation. She currently serves on the board of The Chartrand Foundation, Discovery Montessori School, and The Women’s Giving Alliance. While raising three young daughters with her husband Mark, she has spearheaded initiatives in Early Childhood Development with a specific interest in the JCCI Children 1-2-3 Study and the Healthy Start Coalition. Meredith believes that children in Jacksonville can reach their full potential when they are born healthy and their early-stage development is nourished and invests her time in ensuring these outcomes are available to the greatest number of children possible.

Mark Frisch is a Jacksonville native. He graduated from Bolles High School, then attended the University of Florida, where he graduated in 2003 earning a Bachelor of Science in Business Administration with a major in management. After graduation, Mark joined his family business, Beaver Street Fisheries Inc. where he currently serves as the Executive Vice President.

In 2010, Mark was a recipient of the Jacksonville Business Journal’s 40 and under 40 awards.

Most recently, Mark has bought a soccer franchise in the NASL which will begin to play in 2015. Mr. Frisch’s Hobbies include playing golf, watching sports, and finding time for his love of automobiles. 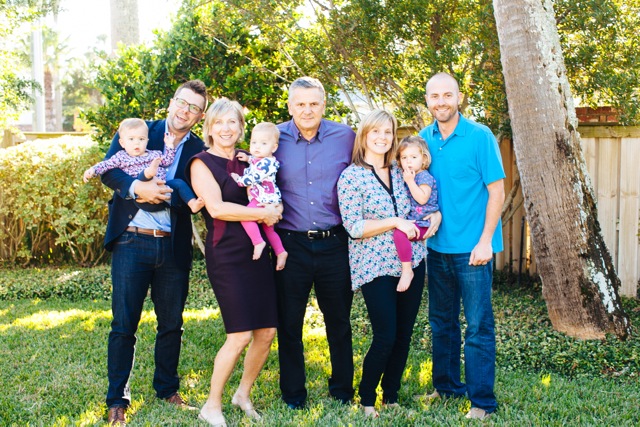