Domestic Violence is a Public Issue

Recently, I witnessed a man punching a woman in broad daylight on the sidewalk in front of my office. There had been arguing before the incident: her yelling as she was walking away from him and yelling as he was walking towards her. When you live/work in an urban setting, discord can often go unnoticed…tuned out by the sounds of construction, the chatter of people walking by, cars playing loud music, or the unhoused (often mentally ill) who are simply yelling in hopes of making their presence known. At first, I didn’t think much of the yelling…until I heard her scream. It wasn’t the kind of screaming that one roars out in anger; it was the kind of screaming that is caterwauled when one is in danger.

Immediately, I jumped up from my desk, ran to the front door, and peered down the street to see the couple now about a half a block away. She was cowering towards the ground as he hit her repeatedly. I ran back to my desk to grab my phone and dialed 911. At the same time, Jimmy, who works in the building next door, had come out to investigate the commotion, as well. What is normally a fairly vacant area of downtown these days, a few blocks from the main police station, suddenly experienced a crowd swell of people rushing to help this woman. Thankfully, Jimmy spied a police vehicle catty-corner to our offices, so he bolted across the street to flag the officer down. I hung up the phone and ran after him to point out the perpetrator, as did about 25 other people. The officer jumped out of his vehicle and pulled the man from the woman, while onlookers cursed the man in disgust for his behavior.

At this point, you may be wondering, “why didn’t anyone intervene before the officer arrived?” In actuality, there were several people who were rushing to this woman’s aide in the midst of Jimmy and me trying to flag down a police officer. As I recounted the story to my mom, I told her it was remarkable to see that many people in the process of assisting her. One man, I remember in particular, was running from the opposite end of the block as me…but the police officer interceded before he could beat this dastard to a pulp. Many others had their phones out to either call for help or record the incident. (I’m just going to just assume those filming were doing so to provide evidence of the assault when later questioned.) I explained, “that isn’t always the case. Oftentimes, people look the other way, not wanting to get involved.” She responded with what a travesty that was…yet that is the reality.

After an hour or so, I walked outside to check and see if the office had hauled this dipshit to jail…the man was sitting in the back of the vehicle..the woman standing with the arresting officer on the sidewalk, and there was now a second police vehicle present. My heart lurched as I watched her talking with the officer…I couldn’t hear what was being said, but I understood from her body language that she was pleading with the officer…likely, hoping that they would not arrest the man who gave her the bruises now swelling on her face. The reason I know is that I have been that woman. I have been in that woman’s shoes…scared of the situation I suddenly found myself in, scared of what he would do to me once he was released from jail, yet scared that I was losing the person I once loved. It is a mind-fuck of a place to be when you in the throes of an abusive relationship…speaking for myself, there is a deep amount of shame that you feel because I got myself into this relationship, but I also couldn’t seem to get myself out. And it’s hard to separate those feelings of love you have for a person when you suddenly find yourself fighting for your life because of them.

There are so many reasons that victims stay in abusive relationships, never seek medical assistance, or never tell family members of the abuse…primarily out of fear of retaliation by the abuser. A similar chemical process happens in the brain as what happens in an addict’s brain, as well…there is a rush of chaos, and then calm after the “storm.” This was likely not the first time this man had struck this woman, and it is also likely she was afraid of what would happen to her when bystanders weren’t there to come to her aide. After all, if the man was willing to punch her in broad daylight in a public setting, what lengths would he go to behind closed doors? For her sake, I silently said a prayer that the officers would take the man to jail, whether she pressed charges or not…if only to give her the few hours she needed to escape. Yet, many sufferers are not protected by law enforcement and often end up being the ones on the receiving end of criminal charges for simply defending themselves. Too often, bystanders won’t intercede out of fear that they will become a victim themselves. In fact, 20% of homicide victims in intimate partner-related violence cases were not the domestic violence victims themselves, but family members, friends, neighbors, persons who intervened, law enforcement responders, or bystanders.

The National Coalition Against Domestic Violence has found through extensive study that domestic violence is indeed an epidemic...1 out of every 3 women experiences some form of physical abuse by their partner…and 1 out of every 4 experience severe physical violence. I fell into the latter of those two stats, and I am grateful to have not only survived but to have had the fortitude to press charges. As angry as I get with the police and their general overreach of power, I do recognize that it was a police officer who saved my life the night that my then-partner tried to strangle me to death. Thankfully, the neighbors had called in the noise disturbance, and the responding officers were empathetic (and yes, I often wonder if the situation would have been different if I were not white…because the data shows that is often the case…Women of color in domestic violence situations are about 50% more likely to be the victim of domestic homicide). As the officers placed my partner in the back of their vehicle, I was pleading with them, much like the woman on the street, when the responding officer turned to me and said, “this isn’t the first time I’ve responded to an issue at your residence, so if you aren’t going to press charges, I will.”

At that moment, I realized that I could no longer try to keep the issue in the closet. Somehow, I snapped myself back into reality, able to admit (after a year of intimidation and assault) that this was no longer love. This was co-dependency. Many of us in this situation don’t see ourselves as worth more. I don’t fault the woman on the street for pleading for her abuser…a co-dependent person will always defend their offender; they mistakenly believe that they “didn’t mean to do it” or that they, the victim, were somehow at fault for the violence afflicted upon them. It is also counterproductive to scoff at a woman for staying in an abusive relationship because that will only make her defend the offender more. Victims have to be deprogrammed and relearn that they have worth and value and that being hit by your significant other is NEVER okay, allowable, or a one-time ‘mistake.’ And if there are children involved, it makes the situation even that more complicated, he will eventually lash out at them…the cycle continues…it’s horrible.

Most victims try to leave at least 7 times before they are successful. Like me, the woman on the street was likely still in the denial stage. This doesn’t make her dumb; it makes her a victim. I don’t believe in criminalizing victims of violence or homicide – stick to the perpetrator for that. As a society, we need to stop victim-blaming and start building self-esteem as the best way to help combat the issue. Shockingly, women are often the biggest culprits of casting shame when a woman chooses to stay.

Take this conversation on social media after Ray Rice punched his then-girlfriend:

Woman 1: Posted this video with the comment, “This fool! & then she actually marries him a month later smh”

Woman 2: She married that fool he straight knocked her cold out

Woman 1: Hard to comprehend how he decked her, cold clocked her out & a month later, “I do’s” are exchanged.

Woman 3: They are both fools… I guess in love. Smh

Woman 4: Don’t even try to understand. Looks like his actions have cost him a career, as it should.

Woman 6: This isn’t the first time he hit her, nor will it be the last… they’re both dumb…next story.

Man 1: To think that he spat on her, knocked her out, dragged her unconscious body out of the elevator, and she still married him.

While the NFL fired him for misconduct, he successfully argued for his reinstatement even though no team would hire him back. They don’t get brownie points for this; mind you, the NFL has long overlooked violence against women (including the inequitable way they treat their cheerleading squads). Ray Rice wasn’t fired because the NFL finally saw the video. Ray Rice was fired because we finally saw the video. 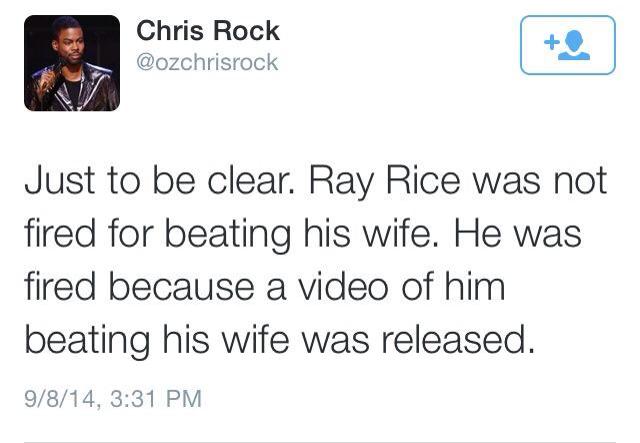 Although uncommon, because I was finally the one to press charges, my offender served time in jail, then had to go through extensive therapy and a period of probation. I have no idea how his life has turned out, and frankly, I don’t care…I am no longer a victim, nor will I never tolerate being in that type of situation again. Yet, my heart aches for this woman…every night, I think about her…hoping she is safe, like so many others in the same situation. It’s up to all of us to keep our communities safe, and that includes safe from intimate-partner violence…the economic costs alone should prompt even the most conservative person to take action.

The more we pay attention, the more we talk about this epidemic in a way that uplifts, rather than shames those at greatest risk, the more we shine light into the dark corners. The more that we speak truth to power, the more violence cannot survive. Violence feeds off terror and the appearance of control, but if we acknowledge where the real blame should reside, embrace these women, help lift them up, then violence has no place to go but retreat. As an epidemic, domestic violence is a public issue that we cannot ignore for the sake of our mothers, our sisters, our daughters, our family, our friends, and our communities.