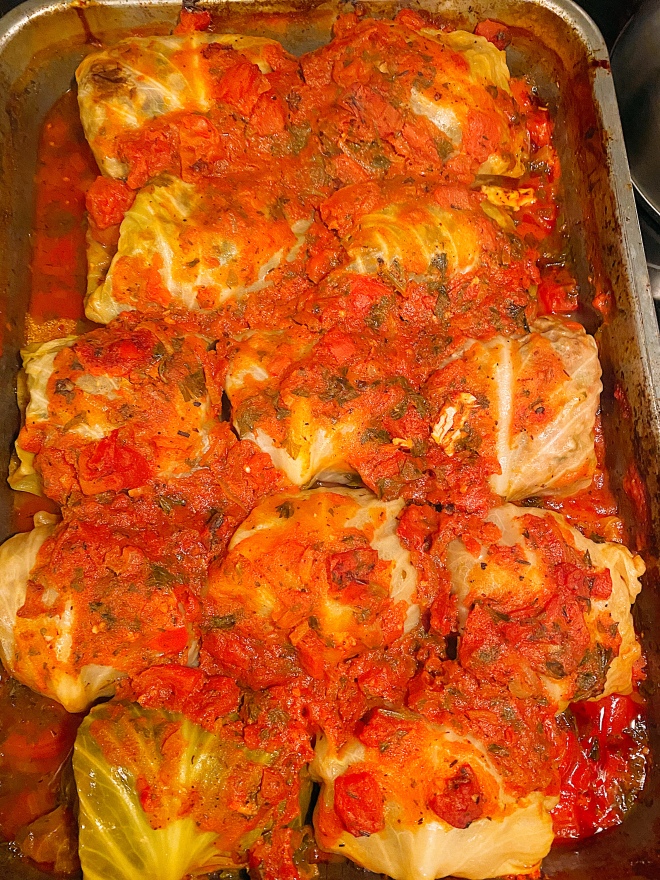 “Promise me you’ll always remember: You’re braver than you believe, stronger than you seem, and smarter than you think.” –A. A. Milne

During the pandemic, S and I have taken up weekly menu planning. It’s a way for me to stay on top of what we have in the pantry, what we need to order from our local veggie delivery service, and helps limit the number of times we must deal with covidiots at the grocery store. Recently, he requested cabbage rolls and shared a Keto recipe from delish.com. I did not make that recipe, but it did remind me that my mom used to make cabbage rolls when I was younger, so I texted her to ask for her version. Then, I kind of morphed the two versions together into my own.

I’m not a huge fan of cabbage rolls, or of cabbage for that matter, but I’ve grown to like it more over the years. S loves cabbage and the rolls turned out quite well if I do say so myself. The full recipe will serve 10-12 people, so unless you’re up for soooo many leftovers, I’d recommend cutting it in half. However, I think S had polished off the full batch in about a week’s time…out of the 15 rolls, I ate 2 and he gorged on the rest. My mom’s version comes from her mother and they are comfort food AF.

Try as I may, I was hoping to not have to boil the head of cabbage to extract enough leaves that I needed for the rolls. I was hoping that I would be able to save the rest of a fresh head for some sort of stir-fry concoction later in the week, but no luck. Cabbage leaves are wound tighter than a solenoid and eat time I attempted to pull a fresh, whole-leaf from the head, I’d end up tearing the crap out of it…then, I’d bring it to S to snack on while I attempted again. Three strikes and I dropped that head of cabbage into boiling water for about 5 minutes and the leaves separated on their own.

Fair warning, this is not a whip-it-up at the last minute, weeknight kind of recipe. Although not overly labor-intensive, cabbage rolls require time, both for assembly and baking, so you’ll want to find an afternoon when you can loll around the kitchen. And give yourself ample time to bake ahead of mealtime. It was somewhat of a dreary day (which are the best days to have the oven on for an extended period of time…so maybe don’t make these in the summer), so I used my three hours to curl up with a big blanket and watch Doctor Zhivago.

Last tip: If you are making your own sauce, I’d recommend starting that first so that it has time to simmer and allow for the flavors to fully combine. Or make ahead the day before…because sauces and soups are always better the next day or the week after. If you prefer to skip making the sauce, then I’d recommend a jar of marinara as a good substitute.

Note: Start by boiling the cup of rice until it’s just soft while you make the sauce.

Saute the onion and celery with the bacon until the veggies are tender. Stir in the tomatoes, sauce, and water, then add seasonings to taste. Simmer while preparing the rolls, adding water if the sauce thickens too much. This should make enough to smother the rolls in sauce and have a bit leftover for dipping if you like.

Mix the ingredients together in a large bowl with salt and pepper to taste and set aside (if you are using a leaner meat, you may need to drizzle with EVOO to keep everything bound together). Boil the cabbage for 5-10 minutes, then submerge in cold water. Pull the leaves off. Put meat mixture in the center and roll.

Using a 10×15 baking pan, drizzle the bottom with sauce so that the rolls won’t stick. Then, line the rolls in the pan until full. Smother rolls with sauce, then cover the pan tightly with aluminum foil.

Bake at 350°F for 3 hours (that’s right, three f**king HOURS). Then remove from the oven, pull the foil off, and let them cool for about 10 minutes before serving with a nice hunk of baguette to sop up the sauce.

This site uses Akismet to reduce spam. Learn how your comment data is processed.