My Wednesday evenings are typically set aside for yoga and wine.  I have tried it this combination in reverse a time or two and I can honestly say that Vino and Vinyasa is not a good combination – Lululemon really should be sued for false advertising…..and not just for their see-through yoga pants either….do people not look at their ass in the mirror after they try their clothes on?  How does this happen that so women say how they were “caught” in class wearing see-through yoga pants?  (I’ve taught yoga for years now ladies.  Believe me, I’ve seen worse things than a pair of see-through pants.)

Seriously though, how do you not know your pants are see-through….these types of lawsuits waste everyone’s time and money – you know the kind where someone does a stupid and expects everyone else to be accountable for it rather than just own up to the fact that they were stupid.  Thanks to your grand ego, we are all going to end up paying $150 for a pair of stupid yoga pants (that are made to withstand a nuclear bomb, mind you) instead of paying the $100 we’d been suckered into previously.  You ASShole!

This is why it’s important to practice yoga and THEN drink wine, so that you avoid the embarrassment of buying see-through yoga pants (and not making the rest of us have to pay an extra $50 for the only pants one can wear to tour 3-mile island)…..Holy RANT Batman, where did THAT come from?

Like I was saying, I went to a yoga class last Wednesday….at a quaint little cafe in the ‘hood.  They have a Zen Garden in the back of the cafe and in the garden lives the resident rabbit “Bugsy”.  Now, just behind this little garden lies an extra room, used primarily for community meetings, Roaring 20s parties, and, of course, yoga (because those three things go together don’t they?).  Bugsy is not allowed in this room and he knows it because every time someone opens the door to the room, he makes a mad dash, from wherever he is in the garden, to try and bust his way in.

When I started teaching the Monday night class there, the owner of the cafe warned me of his antics and was very clear, “Bugsy is not to be allowed in the back room of the garden.”  “Yes, ma’am,” I affirmed.  No matter how much he scratched on the door, begged and pleaded to be let in, even while the Zen Garden was being invaded by smoking, drunken Zombies, banished to the garden by the War Lords of the Spoken Word Apocalypse, happening inside the cafe at that very moment! (deep breath) I did not let him in.

But, last week, I went to yoga – I wasn’t teaching yoga, and therefore was no longer responsible for my actions – and that little shit snuck into the back room of the garden behind me as I entered for class!  Mother Effer!  Let me pause for a moment to describe the room….it is about 10’x15’, lined with chairs on one side and a table on the other, which have been moved out of the center of the room to make space for our mats.  To the right there is a counter where we have our sign in sheets for class and any other crap we want to throw on there.  To the left in a bamboo plant and just in front of you, as you enter through the French Doors, on the opposite side of the room, is a small love seat.  Bugsy picked the love seat to dart under, immediately after he barged his way in.

Thankfully, there were only two other women in the room at the time….two women who I am friends with in the ‘hood….because the first words out of my mouth were “Oh shit, he’s a sneaky little fucker isn’t he?”  To which one of the women, who curses almost as much as I do, started laughing and asked, “are you allowed to say fuck in yoga?”  “Of course you can,” I replied, “but class hasn’t started yet.”

I set my things down and looked under the couch where Bugsy had run, but did not see him.  “Where is that little asshole?” I demanded from the women.  They were looking on the other side of the couch and both confirmed that Bugsy had not come out from underneath his shelter.  So, we moved the couch around to the side of the room….no rabbit.

At this point, I am annoyed – the damn rabbit has lived in the stupid garden for 8 years now – but in just two weeks time of starting a yoga class here, I lose the damn rabbit!  Silence enters the room as we all are confounded by the riddle and then there is the soft sound of scratching……coming from inside the DAMN COUCH!  I bend down to see and there is Bugsy’s little head peaking out from the bottom side of the couch cushions.

“The bastard is IN the couch!” I shout!  So, we wing the couch around again to the opposite side of the room, only to see that there is a rabbit-sized hole in the back of the couch.  “He’s been in here before!  The owners LIED to me!  Those rat bastards!”  Of course, both women are now rolling on the floor in hysterics – both at the fact that the couch just gave birth to a rabbit and at my “Zen-like” state of being.

Luckily, no one else showed for the class that evening because we spent the next 15-minutes playing “Chase the Rabbit” around the room until we could finally shoo him out.  Then, we laid on our mats and laughed for the remaining 45-minutes of the hour long class. 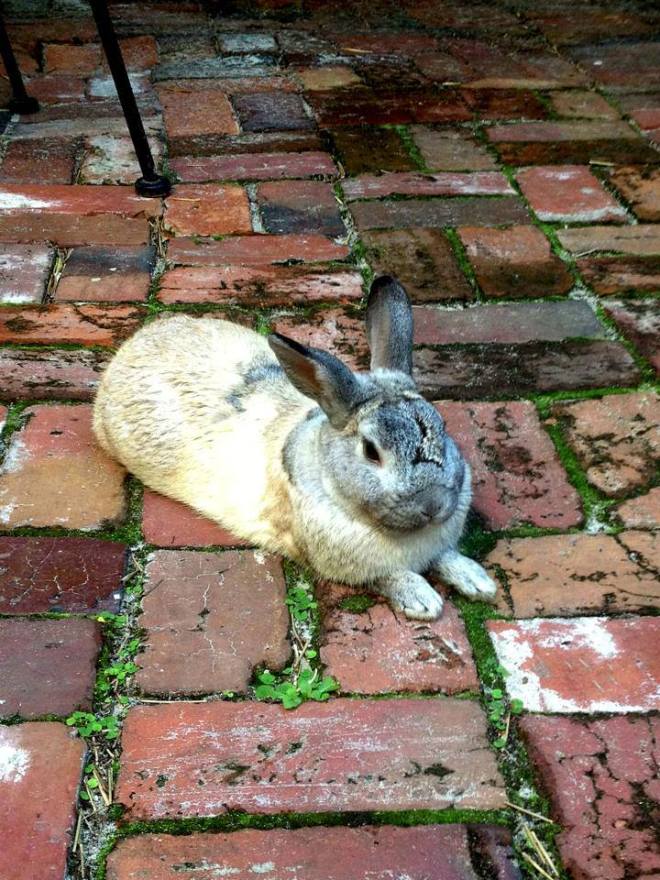