The intention of returning to Florence was to enjoy the food, the wonderful people, and take some time off from moving around so much to savor one of places, that I found I am most fond of, during my adventures.  Now that I have also taken a break from art museums, my focus has shifted to finding food that resembles art.  Ironically, my return to Florence has been filled with changing hotels/rooms no less than 4 times.  Hopefully, moving out of the room that smelled like sewage from a slaughter house last night back into the room I stayed in during my last visit will be the last now until I leave for Paris on Monday.

For example, I had a wonderful dinner at Il Profeta with an Antipasto Rustico that was served complete with a fried zucchini flower – who knew you could eat a zucchini flower?! I don’t even like zucchini, but I must say that when you take the flower, stuff it with ricotta cheese and deep fry the thing, it is damn tasty!  It would have been wise of me to stop there, but I completely gorged myself, following the appetizer with a dish of pasta served with a wild boar sauce.  The restaurant marinated the meat for 3 hours in red wine and oregano so there was no “gamey” taste to the dish.  I have never had wild boar either, so it was fun to try some new things – and piss off PETA at the same time (then again, it is just so easy to piss off PETA, really).

At the end of the meal, the waiter, aka owner of Il Profeta, tried to tempt me with dessert too as he whipped out a tray full of treats, all hand made by the chef, but I felt like a Thanksgiving Turkey at this point, so I passed.  He dug deeper into his bag of tricks and pulled out a chocolate ganache that his wife had made.  This is the dessert that “made him marry her in the first place and now he is a grandfather, so now you know how good this dessert is.”  Mind you, the waiter was no Hugh Grant, so I am not certain he had that many ladies fighting for his attention.  Then he explained, “I only tell that story when she is far away on the other side of the room” (which she was) …..oooohhh, you’re a funny guy, you……

The women next to me didn’t think he was so funny, but they were from Canada, so I am not sure they were ever taught how to laugh (All I could think was how grateful I am that my mother is not a pretentious uppity snot-face who chastises everyone around them for not measuring up to her idea of perfection – thank you Mom – you ROCK!)

The next day I decided it was time to balance out all of the pasta I have been eating with some vegetables, as I think my body might be on carbohydrate overload – I am drunk at 9am with all of the sugars and yeast swimming around in my system and no I haven’t started drinking wine that early in the day yet, thank you.  So, I ordered spaghetti with shrimp and zucchini for lunch the next day – again with the zucchini?!  The restaurant added hot peppers and frommage to the dish, so that made eating some healthier fare more delightful. 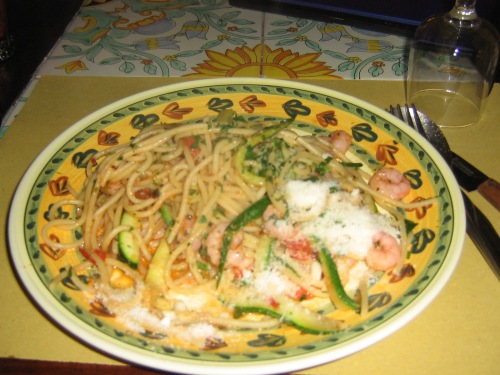 I also took another cooking class this week on how to make Florentine pizza and gelato!  You can bet I am going to put that to use when I get home – talk about delicious.  I learned other interesting things while at the class like basil is poisonous if you eat too much, bread is difficult to digest if you use let it rise too quickly, and to make excellent gelato you have to balance fat and sugar with the right amount of liquids and solids. 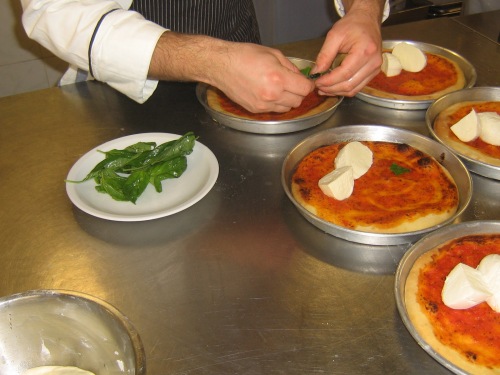 I also met an Egyptian woman from Saudi Arabia who was on vacation from all of the oppression she lives under on a daily basis her country.  Where does she go every time she wants to find some freedom and peace?  Florence (as chaotic as it is here, it is truly a peaceful place to marvel).  There is so much she shared with me about the freedoms she is not allowed that are just a given in the US.  As crappy as I think America can be sometimes, I could not imagine being controlled by a husband not of my choosing.  Or be told I am not allowed to drive?!  We all know how that would go over…. 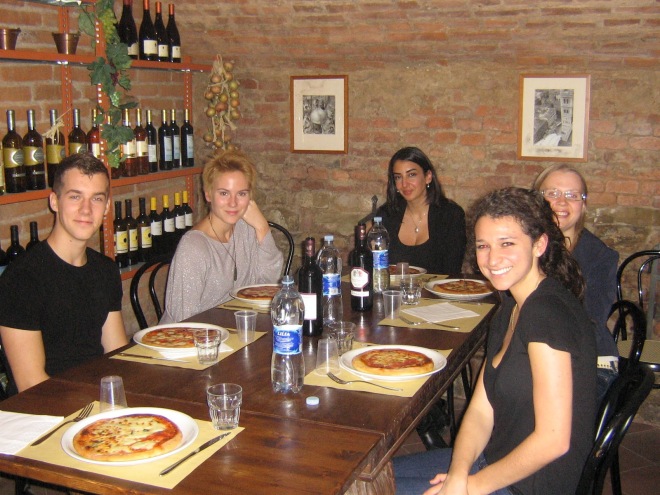 As I walked back from the class, I stopped to gaze at the Palazzo Vecchio lit up like a giant football stadium, and I thought about how incredible it is to keep finding these moments of gratitude and contentment tucked inside the pockets of annoyances and irritations of travel (and daily life).  Instead of crying, I discovered a huge smile had spread across my face, as I listened to Mozart on my iPod and just reveled in the awareness that I am coming home. 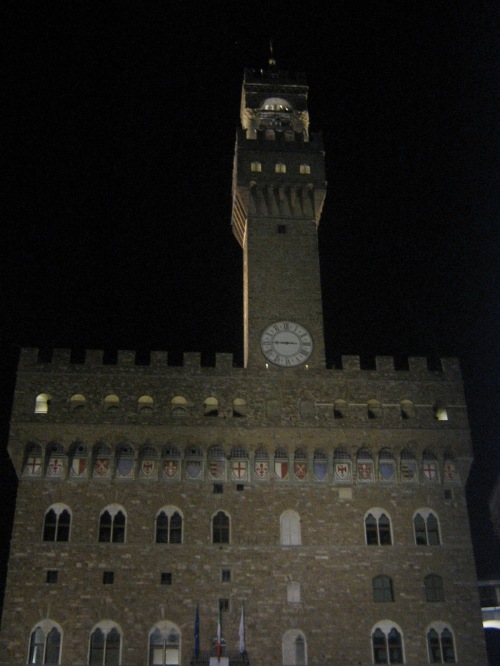