The Day to Pay

The Symphony last night was lovely – rather the String Quartet decked out in authentic 19th Century garb.  (I was able to sneak a few pictures during the performance, so you can check them out too).  The music was lovely and when the concert was over I strolled over to St. Mark’s Plaza where I found other musicians playing classical music.  It was a nice crisp autumn evening in Venice, so I stayed out and enjoyed the elegance of the area until I got too chilly and had to walk back to my hotel.

My plan for the day today, then, was to visit Peggy Guggenheim’s home in Venice and the Castle Rezzonico in the morning and hang out in St. Mark’s Plaza for the remainder of the afternoon.  Unfortunately, I spent a bulk of the morning zipping around the city in an effort to find the Guggenheim Collection, only to get lost no less than a dozen times in this confounded city.  Just as a side note, don’t ever use Google Maps when you want to find your way around Venice – it has now failed me three different times on where the correct location of a building was, so I broke down and bought a map from the local tourist office here.  I think they must be in cahoots with Google to make a profit – it is the only city I have been to so far that charges tourists for maps.

This started off my day of paying too much for crap and rarely finding anything that I wanted to see.  I finally gave up and went to St. Mark’s Plaza first, then the Guggenheim after.  As expected, St. Mark’s Plaza was ridiculously busy which was quiet a change from the peaceful walk around the plaza I had last night. The longer I stay in Italy, the more I start to behave like the locals.  I cut in line to view St. Mark’s church, ran over no less than 4 small children as I buzzed through the crowds this morning, and yelled and three couples for getting in everyone’s way while they were window shopping at Porto Rialto.

I was in and out of the church in about 15 minutes.  It was big, had lots of gold and is as ridiculously over done with opulence as all of the other Catholic churches here.  The only difference between St. Mark’s and the other hundreds churches I have seen in the past two months is that this one might indeed float away……

Hey Italy….here is a thought…..maybe you need to demand that the churches step up and give 20% of their income back to the community – it might solve the country’s debt crisis (and Greece’s too!) Oh, and don’t forget to make them feel reeeeallly guilty if they don’t believe they should contribute their life-savings to the cause (by the looks of things they have some change they can spare anyway)! Next stop on the itinerary….Palazzo Ducale.  But, when I found out that it was 24-euros to see the place, I opted out.  When you have seen one castle, or twelve, you have pretty  much seen them all.  Plus, I was still planning on viewing the Castello Rezzonico this afternoon, which the locals had recommended over the Ducale, anyway.

It was now half past 1pm and I was over the Piazza San Marco, so I ventured over to purchase a one-way ticket for the boat ride along the Grand Canal later this evening (I took the boat, not a gondola – because that would just suck to do something so romantic on your own…really).  I thought it wise to have my ticket in-hand, so that I need not worry about having exact change for the machine after I spend all of my mula on museums today.  I tucked the ticket in my pocket and walked across the canal, for the 7th time today, to the Guggenheim (withOUT getting lost, thanks to my new map).

Peggy Guggenheim was one bad ass mamma jamma, I must say.  She had quite the collection of work from amazing modern artists from all over the world – pieces not just one piece from Picasso, Chagall, Salvador Dali, and hundreds more.  I have never liked contemporary art, but have certainly found a new appreciation for it since it has been refreshing to view amongst the thousands of sacred pieces of artwork I have seen.  I did have an epiphany as I was perusing her collection – it is the f***ing French who always touch the artwork!  This came to me as I observed several different people reach out and TOUCH many of the pieces in the Guggenheim and then I listened in as they spoke – 100% of them were French!  Why must they do this?  Even after the security guard scolded one guy for LEANING on the dining room table, I went out to the sculpture garden and found the dipshit sitting on one of the sculpture – I know it is a chair and all dude, but seriously???

By this time, it was close to 4pm.  I had one more stop on my schedule, but I hadn’t eaten since breakfast.  I decided that I could fit the Castello Rezzonico in before I ate, then I would have an early dinner before jumping on a train tonight.  Big mistake because we already know that when I get hungry, I get pissy.  Not only do I get pissy, but the longer I wait to eat the greater the risk for me passing out due to low blood sugar.  Upon leaving the Castello – I didn’t feel so well, so I raced over to the boarding area for the boat, but I could not locate my ticket anywhere.  I wasted time retracing my steps, but it was getting to the point that I couldn’t see straight, so I opted to go back to the boat stop and just beg the captain to allow me on board.  I had the receipt, but no ticket.  Fortunately, you are allowed to get on the boat without a ticket, I just had to buy another one – ugh.  Whatever, I just needed to get to a restaurant and eat.  This did not seem to stop me from snapping a bunch of pictures and a video during my ride up the canal, however!

As we docked, I was the first person to jump off and headed straight to the first ristaurante I saw and ordered Fettuccine Alfredo to the tune of 23-euros and it wasn’t even good!  However, I finished it because I needed to eat, but Venice is 2-for-2 on crappy meals – this is not a good record to have in Italy.  It was also 3-for-3 of me overpaying for things and the night wasn’t over.  I still had to get on a train (as I have opted to go back to Florence where the food is delightful and the people are charming).  Second class seating was sold out, so I got stuck paying for first-class next to an older woman, who smelled like piss (again, she was French!)  The French have now officially struck out today, as have I.  I am going to drink as much free champagne as they let me have to make up for the difference in 1st and 2nd class fares and hopefully pass out so that I don’t have to talk to Ms. Pee-Pants any longer.  I am officially an a-hole, but at least someone in Venice loves me. 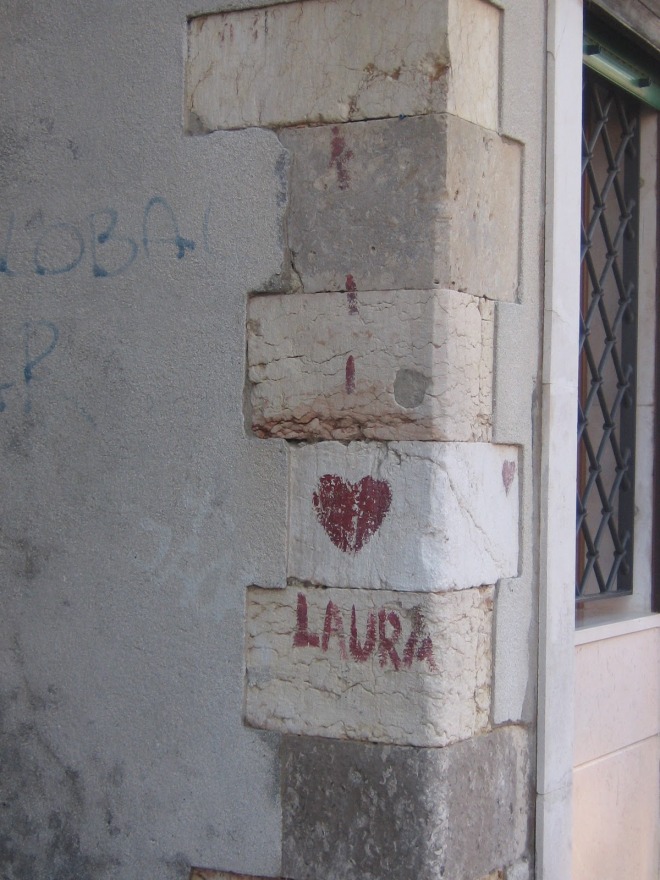