I woke up this morning feeling a bit more rested and content to complete the remainder of my journey.  I am sure you can tell I am getting tired because a.) I keep bitching about it and b.) I am posting less frequently due to Ms. Poopy Pants Writer’s Block.  Due to my travel exhaustion, I was contemplating skipping Venice but opted to book a hotel and get on a train this morning headed for the sinking island, so that I could see it before it is gone.  According to the BBC, both the rate at which the city is sinking combined with the threat of rising sea levels, due to climate change (suck it Republicans, it is real), Venice was impacted by an 11-inch shift over the past century.  This has caused Venice to flood ever more frequently – 100 floods in the past year alone!  I know I often take pictures that display a crooked horizon, but in this case, it is the buildings that are offset, due to the shift in the terrain, not my inability to line up the camera with the ground! 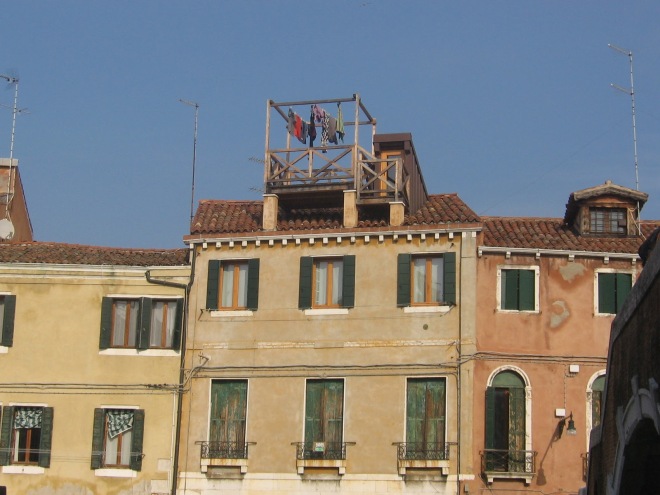 I was amazed to see the number of tourists still tromping all over the marshy island, despite the fact that it is getting to be close to the winter season, and also another reason why Venice is sinking.  Of course, the weather is absolutely beautiful and Venice the giant tourist trap of Italy, so I got hit with a double whammy.  Every calle, via, fondamenta, and porto are jam-packed with tourists who do not know how to walk with any sense of direction or purpose.  They meander, and then stop whenever they get the urge to look at something causing a huge traffic jam.  (I think my idea of meandering and their idea of meandering are much different.)  I kept wondering why there were so many people stretched from one side of the road to the other, and then after a half a day, it finally dawned on me “There are no cars in Venice!”  Duh – big red truck.  Now I can reside to the fact that I will be walking in a herd of sheep for the rest of my time here.

It is actually a benefit that I am forced to slow down my pace (when I try to look at the positive side of things) because it helps me conserve energy and also keeps me focused on which street I need to take in order to reach my destination.  Venice is an utterly confusing city as it was laid out by someone who was drunk on wine, while smoking fettuccine and shooting Bolognese sauce at the time (and quite possibly high on paint fumes as well).  The “10-minute walk from the train station to the hotel” took more like 45 because I missed the sign for the damn alleyway (granted the fact the sign for the alley was 50-meters down from the corner).  Signage overall is poor here – you really are challenged to pay close attention, or you might miss the tiny indication that you needed to take this turn instead of the next one or you will find yourself in the middle of a canal.

Once I got myself checked in, I then ventured out into the city to the Gallerie dell Academia. Part of the reason that I travelled to Venice was to view the Vitruvian Man by Da Vinci.  I remembered reading, at the Last Supper, that the drawing was housed here in the Sinking City.  What I did not read was the fact that they only bring the drawing out of the morgue occasionally for viewing.  Thus, it was not on display (nor do they have a schedule of when it would be on display) so they effed me out of 6.50€ to see about 20 more Madonna con il bambimo artwork.  (Knowing Italians, I am sure this was their plan all along).  Even though, there was grand and darkly religious artwork displayed by masters like Rinaldi, Bellini and Vecchio, the only piece I found remotely intriguing was a painting by Valentin de Boulogne entitled Martirio di San Bartolomeo completed in the early 16th century.  It depicts a man cutting a piece of flesh from Bartolomeo’s thigh, which I could not take my eyes off of.  Obviously, I am feeling more violent in my exhausted state and more impatient – it took me just 45 minutes to view the entire museum.  (I came to view one particular piece of artwork, it wasn’t there, so I didn’t really care about the rest – I am going to be brutally honest…..shocker).  Obviously, it is time for my afternoon nap.

Unfortunately, I used up my naptime trying to find my way back to my hotel, thus, I had little time to change and head back out to locate dinner and the theatre because I had tickets to the Symphony!  To be correct, I had bought tickets that afternoon, along my route to nowhere, to attend a string quartet performance of Vivaldi’s Four Seasons, complete with 19th Century costumes and all.  Since the performance did not begin until 9pm, I opted for Viennese Pizza at a nearby restaurant, which was basically sliced hot dogs served on top of cheese pizza.  I am not sure how much more awesome you can get, really.  Then again, I was probably just famished from an afternoon of gallivanting across Venice.  Regardless, I find it interesting that I have figured out how to order wine in Italian, but not ask for directions…..peculiar, really…