As published on RecoveringYogi today:

When we dig up our old teaching bios and deconstruct them to get to the truth of the matter.
By Laura Riggs

Laura began practicing yoga over ten years ago as a means of exercise after a knee injury while training for yet another race. (GAWD, I hated running, but in Colorado, everyone is expected to either hike, run, ski, bike, or do all of the above and then go camping. I don’t give a crap about the mountains and their splendor.) Immediately, she fell in love with the practice and sought to learn more about the spiritual and meditative aspects of the practice. (I became a total yoga groupie, sad to say.) She immersed herself in the study of the ancient philosophy as a way to deepen her understanding of Yoga. (I drank the shroom Kool-Aid, dude, and it was mighty tasty. When I came back to reality, I had a bitch of a headache and realized I had missed out on so much real-life while I had my head up Shiva’s ass.)

She currently teaches Vinyasa style Yoga in Denver. (Well, that was, until the studio fired me two weeks before Christmas because I wasn’t willing to sell their overpriced, shitty programs any longer. Now I don’t teach or practice, and I am happy to report that I am back to running and realized it wasn’t all that bad after all…go figure.) She strives to give her students something to carry with them once they leave their yoga mats. (Usually a nice dose of glute work, so they end up with a sore tuckus the next day.)

She also leads 200-hour Power Yoga teacher training.  (I will be not held responsible for whether or not the participants can actually teach, though. Half the time they don’t even show up for class…sigh.)  In addition, Laura designed a semi-private workshop series for students new to yoga who want to dive deeper into their asana and meditation practice.  (Okay, I have to say this was the best part of teaching. We had FUN!)

Laura is inspired by the divine power in all human beings to create the world they live in. (Blah, blah, blah) She believes the only reality is the reality you create through love and appreciation. The greatest gifts she can offer as a teacher are joy, love, and devotion to her students, inspiring them to learn more about their true Self. (As a friend of my mother’s said so eloquently recently: “Having spent the first part of my life under the assumption that most people are basically ‘Good’, I’ve decided to live the rest knowing that there are people who are really mouth-breathing-lying-inbred-dog-sucking-shit-fuck-manipulative-you-can’t-trust ‘Bad’ So the free ride is over, bitches.” That is a much more realistic view of life, I think.) 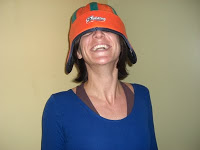