My train leaves for Nice at Noon, so best not to chance anything and schedule to leave the hotel by 10am.  There is a short ride from the subway to the train station, and I already made sure I have plenty of euros.  I want to commend the French (sorry, Chris) because they haven’t screwed me on the exchange rate, nor do they charge extra fees (so it wasn’t just the taxi driver).  I think they really just want you to hurry up and get your business done so that they can go back out and smoke (it’s interesting to see a culture of people be so lazy, yet so impatient at the same time – boggles the mind really).  Thankfully, with all of my planning, I arrive at the station before 11am (as my family will attest, being this early to travel anywhere is definitely rare, if not a record).  I went to the billet machine to retrieve my ticket, but I did not have much luck since I didn’t have the actual credit card that I purchased the ticket with in my possession (I actually left that credit card back in JAX, but had made a copy of it to bring with me so that I could buy tickets, like…..for the trains, online).

Yet, the system had outsmarted me again…. shit!  Now, what to do?  I waited in line to speak to a customer service agent about my predicament.  Unlike moi, there were soooooome people who did not plan accordingly and were late – you could see they were obviously panicked that they had to stand in a line that wasn’t moving fast enough and their train was leaving soon (It is easy to spot when someone running late for a plane or a train, they didn’t plan accordingly and the counter agent is taking forever. No matter what language you speak, you can see their worry they may not make their connection because they dance around like they have to go Number 2, reeeeeeally bad, but are afraid to poo in a public restroom).  Like any dumbass caught in this situation, these poor planners tried to cut in line, only to be yelled at and pushed aside by the other people who had been waiting before them.  One crafty young fellow, waited for the weakest link (that would be yours truly) and gave me 10 euros so that he could stand in line with me and then go ahead since my turn was next.  Mais oui, monsieur!  I was in no rush, even if the four people behind me were…… C’est la Vie!

Our turn was up next so he followed me to the counter, and while I hunted around for my confirmation number (since I hadn’t written it down, yet thought I had this planned so well, karma bit me in the arse again – doh!), he made his break for it, got his tickets and ran off to catch his train that was departing in 2 minutes!  Bon Chance!  Meanwhile, I managed to locate my confirmation number and asked the agent if he would be able to print me out a paper ticket, no problem…….until, he asked to see my credit card that I had used to make the payment…..double shit!  I explained I did not have the card on me, but I had a copy of it and showed that to him.  He asked where the original was and I said at home, where is home?, America, well I guess you won’t be able to retrieve it then will you?  (YAY for funny ticket agents!) He worked his magic anyway, and printed me out a ticket then handed it to me and told me they don’t normally allow it, but that he would this time since I tried to speak to him in French!  Magnifique and Merci Beaucoup, Monsieur!

With my train ticket now in hand, 10 euros in my pocket and an hour still to kill (since my train was now delayed 30 minutes), I found myself a chocolate croissant and a café au lait.  When I finished “breakfast”, I decided to have a looksy around and noticed that the station is probably the cleanest area of all of Marseille.  They also offer a wide range of stores you can shop at while you wait like Sephora, Armani, and, you know, all of the places I normally visit – BAH!  Seeing as how there was nothing I could afford, nor did I want to haul any extra crap around with me for the next two months, I sat down instead and worked on my homework.  I am going to take a moment out of this story to just express to you how much I effing HATE Macroeconomics, every time I try to read that shite, I want to burn my eyes out of my skull.

And we’re back – well actually I am on the train to Nice.  The countryside is beautiful as it goes by – sort of looks like Grand Junction but greener, and since I know what Grand Junction looks like, I decide to take a nap (I am guessing that having sugar and caffeine in the mornings is making me nose dive in the afternoon, but it is my vacation and I will keep doing it because chocolate and coffee are wonderful together, so there!).  When I woke up, we were near Cannes and the ocean was an unbelievable deep, vibrant shade of blue.  To which I did not get a picture because all you would have seen was the dirt and bug guts on the windows of the train.  I was excited to see the water and ready to be off the dang train already!  Thank GAWD twenty minutes later, we pulled into the Nice Ville train station where I quickly departed to find my hotel, hunt down some lunch (my stomach was growling so loudly for the last half hour of our train ride that the man sitting next to me got up and changed seats).

I walked almost directly to my hotel and checked into my room and went upstairs to put my things down.  The room smelled musty when I stepped inside and I quickly figured out why – the carpet by the front door was soaking wet!  I set my bags down so that I could assess the issue, which looked to most likely be coming from the bathroom.  I wanted to make the best of things, because Nice is also busy and there were no other rooms available for the weekend, so I didn’t have much choice.  My room is even smaller than the jail cell in Barcelona, so this will now be my new jail cell for the weekend, but musty, wet dog smelling carpet was not acceptable.  I went back downstairs and tried to explain the problem to the attendant at the front desk.  He did not understand what “wet carpet” means, so he came back up to the room so that I could show him, to which he said he would let his colleague know immediately.  Whatever, dude – I need lunch so I am going to leave and go find something other than your head to bite off, and you work it out while I am gone……. 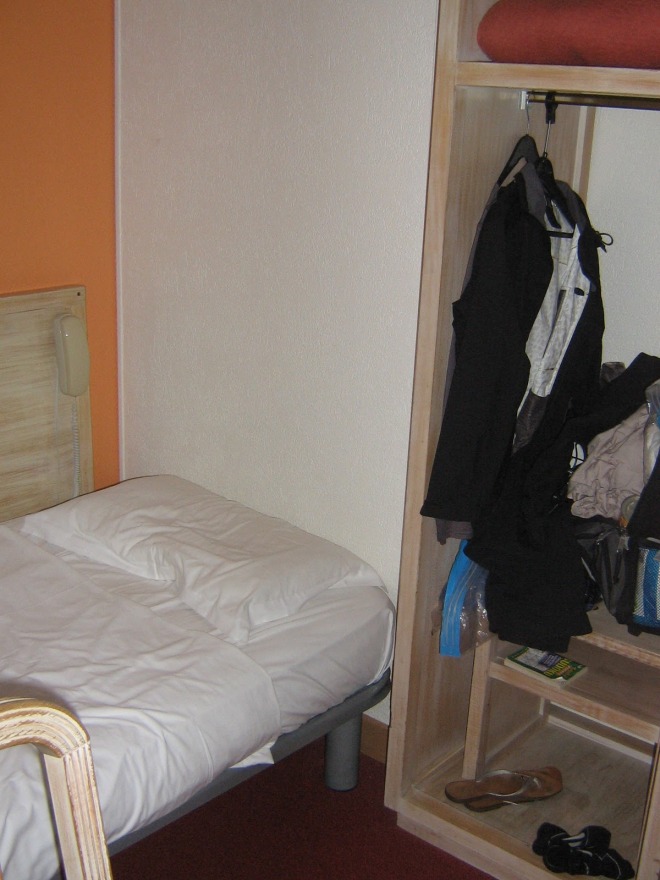