Sooooooo, I didn’t find any euros on my bus ride to Marseille.  But, you know what I did find in Calypso when we stopped so everyone could get out and stretch their legs a bit?  WEED!  Let it to me to be the only person who is walking around taking pictures of the landscape and happens to look down at the bushes next to them and spots a big fat sack of marijuana!  At first, I looked around to see if the police had staged a sting operation, but saw no one watching the bushes but moi.  I reached down, pulled the bag out of the bushes, inspected it thoroughly, took pictures of it, then put it back.  Yes, I put it back for several reasons:

1.) I am not 20 years old, if I want pot, I can buy it
2.) Smoking pot makes me feel like ARSE
3.) I have better things to do on my trip to Europe than get high, if I wanted to do that, then my ass would still be in Denver

I do have to say though, I stood there and stared at the bushes for a good 15-minutes and laughed along with the Universe’s sick sense of humor – well played, sir, well played, indeed…..

I think it was definitely this guys…..and he was way to high to remember where it went……. 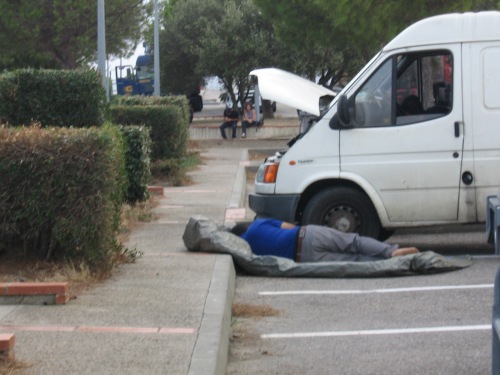 The bus arrived in Marseille at 9:45pm to an empty train station, of course without any euros, I was in need of a Metro pass to get from the train station to my hotel.  Unfortunately, every place was closed down and the ticket machines in France do not even take credit cards – WTF century is Europe living in anyway?!  I was just about to pitch a proper temper tantrum, like my 3-year-old goddaughter, right there in the middle of the train station after I asked the woman in the tourist office, “Parlez vous Anglais?”.  She replied “NO” tersely.

Really?!  You work in the TOURIST OFFICE that says JE PARLE ANGLAIS!  I took five years of French, and now can only speak bits and piece (thank you public education), but I know enough to say “Chienne!” However, I caught myself just at that moment when I noticed the police officer standing near the counter holding an AK-47….aaaaaannnnddd instead I politely said “Merci” and went to find a taxi.

Taxi drivers have to be some of the most industrious people I know.  Many of them get a bad rap, but if you seriously want to know about a city, or find someone who speaks 8+ languages, or where to get a good meal, etc. then ask a taxi driver.  I found several that spoke English – and were more than happy to take my American dollars for transport from the train station to the hotel – and the exchange rate was spot on with current market conditions.  Since it is Sunday and all of the banks are closed, and I still have no fricking euros – I need to go hunt down a taxi driver.