Soooooo Denver, you finally got your revenge from my previous blog post, via the USPS…..

Backstory: I had sent a package, on April 25th, to my mom before I moved out of my condo.  It was full of odds and ends things for her to enjoy, like the silverware I received when I got married, salt and pepper shakers too, chargers for the china set (that matched the silverware) I had also shipped to her the week before, perfume, a few books, a meditation statue, CPY t-shirts to burn the crap out of, some cat toys, dog shampoo, and dog spray – everything a girl could ever need was to arrive by May 2nd, right?

Wrong!  After much deliberation, the USPS (Capital Hill Station, Denver, CO) decided that she didn’t really need 3/4 of these things, and sending a box that weighed slightly more than a small child was just asking too much.  Hey USPS it’s called weight lifting, try it some time, it will do wonders for your life expectancy as well as your ability to do your JOB!

So, they broke my box open, and emptied out the contents.   All of the heavy items were replaced much lighter items, placed back in the box. 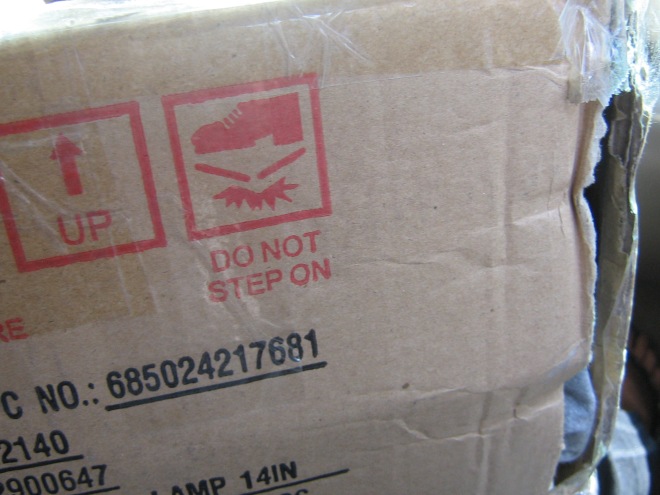 Finally on May 9th, the box arrived at my mom’s house.  Immediately, she knew that something was askew, when the box was wrapped in tape, plastic stripping, and a big fat sticker on the top that said something about the box being damaged on May 3rd.

I guess it takes a week to empty and repack a box…..again USPS I salute your efficiency….it took me two weeks to pack up my entire condo I had been living in for 7-1/2 years….I am currently unemployed, so if you need someone to train your people on how to pack boxes, I would be more than happy to have you hire me on a consulting basis!  Maybe then, the Audit Service for the Unemployment Office would get off my ass then, too.

The label requested we fill out Form 3760 and send it on down to Atlanta, Georgia to the Mail Recovery Center – where all the lost and lonely mail goes when no one claims it.  Then, once a month they put all of your lost items up for auction where you have the chance to repurchase the items that they misplaced of yours – isn’t that so thoughtful of them?  🙂  Instead, I got on the phone with the fine individuals at their help center, and said, “Help! The mail I sent to my mother has been stolen and someone else’s contents have been placed in my original packaging!”  I had to speak to three different people before I finally spoke to someone who understood the issue, and opened a case with the Postal Inspector.  Next, I called a different number to request Form 3760, because when you call 800-ASK-USPS they can’t send the form, the local management office has to mail it out to you.  They also don’t house the form on their website, to assist with creating ease during this cumbersome process.

I would say this is government working at its optimal level, but the USPS is now privately owned….and I really can’t find a company to hire me right now?!  Maybe I need to start acting like a dipshit, too, and I might secure some meaningful employment right quick.

Fortunately, my mother has a friend who works in the Jacksonville Main Post Office, so she got on her handy dandy little Facebook page, and sent him a message (finally Facebook has proved itself useful!).  He suggested opening a case on the Postal Inspector’s website directly (which the USPS keeps hidden at the bottom right corner of their webpage), and also with the Inspector General – yes, they are different.  I submitted complaints on both websites, and received emails back summarizing “thanks, we’ll look into it, but don’t call us, we’ll call you.”

Then, his assistant, Ms. Tammy, contacted me to discuss what items were missing from the package and what items they had been replaced with, so that she could call both the Denver Distribution Center, and the Jacksonville one, to see if any of these items were located in their lost and found (but….I thought all lost mail went to Atlanta).  She then emailed me a copy of Form 3760 (fancy that!), I filled it out and sent it back with as much information as I could.

In the meantime, Form 3760 arrived to both me at my new address in Littleton (Attn: Laura Briggs, but whatever), and to my mom in Jacksonville.  The request being to fill the form out (check), mail it to the recovery center in Atlanta (check), and include pictures of the missing items if possible.

Pray tell, who takes pictures of their mail?!

My mom then received a second envelope from Ms. Tammy with a label included to send the items that were not ours to the Mail Recovery Center (children’s clothes, little kids winter coat, Red Sox jersey, and a hockey jersey – all of which I am more than happy to get rid of), along with a handwritten note…..half of which was missing…..there seems to be a theme here.