Back from Costa Rica!

Finally getting an update to you all since returning from a wonderfully restorative trip to Costa Rica – all made possible by the very amazing, and beautiful soul, Senora Sherrye (muchas gracias mi amigo).  There is so much to be said for the simple beauty of living by the way of the tides to help heal the soul.  It also gave me time to figure out how this whole blog thing worked, so that I am able to keep the updates coming without loading too much crap in your inbox.  🙂

Of course, the journey from there was not without a moment that does make one wonder, are we all here for God’s amusement?  As I was sitting on the plane, contemplating whether I had made the right decision to go (since this time last year I was down there with “the Prince” – and we will just leave his name at that), the flight attendants began to pass out the Arrival Visa forms to fill out before departing the plane and going through the fun exercise known as Customs and Immigration.  As I began to fill out the form, my most very favorite fountain pen decided to spring a leak.  Now this is just upsetting – not only am I not going to be able to fill out my customs form, but I now am covered in black ink!  Only I have no idea, until I look down and the form itself is smeared with ink, my hands are covered in ink, do I then realize, ohhhhhh….I rubbed my face 5 seconds ago…how lovely.

I got to the bathroom on the plane with relatively few people staring at the oddities across the front of my face, in time to see that I now looked like a pygmy indian.  Fortunately, the ink washed off my face, but did not come off my hands for the next two days of swimming in the ocean, practicing yoga on the beach and throwing my grief into the Pacific.  Was I going to make a good impression in the Immigration line or what?  Apparently the Tico People find black ink sexy, because they let me and the one little bag I packed sail through Customs and out into the sunshine to meet Sherrye and Remi (her adorable little Yorki-Poo!) for our drive from Liberia to Nosara.

The ride along the dirt road with open winds was refreshing to smell the freedom from sadness, and the saltwater breeze as it crossed the hibiscus and cedro amargo trees.  Even though I hadn’t eaten much all morning, I had plenty of sand and bugs to munch on for the ride down, so we decided to head to her house, drop off my stuff and then get our yogi butts out to the beach for a walk, and a flow by sunset.  Remi loved this habit of ours everyday – I would run from the HOT sand to the water to cool off my burning feet and he would follow, and then lay his belly right on the beach and let the water cool him down! 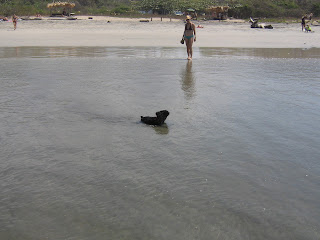 I spent one afternoon hiking to a place I had gone last year, and cried….for awhile.  It was a relief to heave the rest of the saddness I had been holding onto into the ocean (because as the Mexicans say, the Pacific has no memory), and make space to only carry the small, good things home with me in my heart.  Unfortunately, I believe one the local Pelicans picked the crap out of the water, and dropped back into my suitcase and told me in so many words, to get that S**T out of his house (well, buddy, I don’t want it either!  Maybe we could take it to a pawn shop and get some toilet paper instead?!  How much do you think that stuff might be worth anyway?  I am thinking definitely only about a square of TP, enough to wipe my skinny white A** with).  Alas, I was stuck with carrying it all back home with me, and now have to find somewhere else to dispose of the mess. 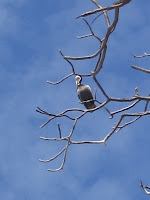 As I sat on the Boca Nosara, however, I was lured out of my heaving sobs by the most intriguing man.  And for the longest time, I was perplexed – I couldn’t understand what on earth he was doing.  And then I began to laugh, and how inappropriate it was, and yet here he was standing in the ocean, with all of the world to see, proud as could be to have his hands where they shouldn’t.  It wasn’t until the next day, that I realized what he was actually doing…..

At least it gave me some respite from my own “drama” for awhile.