Hi there!  Sorry for the delay in sending you all your next update – I got scolded this weekend by a few of you for not sending them out sooner.  I have no idea how many days go by sometimes!  As a result – I have three short stories for you – written out in as long of form as possible!  😉

For a few of you this will be review, but I wanted to give you a brief history of Jacksonville – so that you start to get a better visual of what my mom’s neighborhood looks like.  Back in the late 1800s, early 1900s, Jacksonville was the old Hollywood…..before Hollywood, CA existed.  This is where early films were made, and stars were born.  They all lived where my mom does now, in a neighborhood just north of downtown called Springfield.  After things moved west, the area became depressed, and Springfield went to the degenerates, addicts, and homeless.  It has only been in the past 5-10 years that people have moved back into the area, and started to refurbish some of the old homes and mansions that were still left.  Some were in such disrepair that they had either fallen in on themselves, or were condemned and are still being torn down.  In their place, new homes have also been built to fit into the style built 100+ years ago.

Because the neighborhood is still in transition, many of the older “residents” to the area, have made claim to some of these dilapidated buildings – and they are the most interesting people in the neighborhood!  I know that one day, the yuppies and Gen-Xers will force them into some other more impoverished area, but what they don’t realize is that these are the people that give Springfield its charm!  And even though, I have lived off Colfax for the past 8 years, in Denver, there is some s**t down here that happens that surprises even myself.  Ladies – there are just some things that go one down here that people who live above the Mason Dixon line don’t think of doing…..

One such resident is a man that lives here in the neighborhood who owns 8 or 10 mannequins.  They all reside on his front porch, and he dresses them up so that it always looks like there is a porch party happening at his place (people LOVE to have porch parties here, a term I had not heard until coming to Floriduh).  Sometimes the parties he has are fancier, and they are all dressed in evening gowns (because all the mannequins are female – since the man is a playa after all).  Sometimes there is a beach theme, or an early afternoon garden party.  It is fun to drive by every now and then and see what sort of porch party he is hosting that day.  My mom and I place wagers on what we think it will be (my mom is winning 3-1; but I think she has an unfair advantage).  Seriously – who has that kind of time?  And then I remember, “oh yeah, I do.”  If mannequins weren’t so damned expensive, I could buy some new friends and have a fabulous porch party of my own (I will name one after each of you)!  Come to find out from one of the other women in the neighborhood – there is another man (we will call him Mark) – who enjoys buying his dresses from the porch party scene – and Mark is straight.

In the ‘hood, there is a church located nearby that, I kid you not, is called the “We’re for Jesus Love Center”.  Interestingly enough, it happens to be on the same corner that most of the ‘hood hos hang out.  Now I know that Colfax is notorious for these kinds of “residents” as well, but how many of them carry their four kids with them while working?  Why doesn’t the church offer these poor single mothers some sort of day (or night) care option?  It just seems like they would make a killing – on a busy evening – I easily see 20 kids waiting for their mamas to come back to their corner.

When there isn’t anything going on in the ‘hood – which is a rare occasion I must say – we go out to the beach.  My mom normally won’t go to the beach until the temp hits 80 – but she has conceded to go with me when I need some time to just stand and stare at the ocean.  The first time I made her go out, it was 41 degrees – and I stuck my toes in the sand (pics attached, because I know you jealous)!  Saturday was nicer at a balmy 72, so we headed out – again against her rules, since she also doesn’t go on the weekends because it is “too busy”.   She is spoiled – and I love her for it.  But, she would have missed the guy we saw yesterday with a propeller, and a gas tank strapped to his back – he was flying around with a parasail.  It took him about an hour to get his fat ass off the beach and into the air, but once he finally did – it was an intriguing sight to be had…..Orville Wright, meet your great-grandson…. 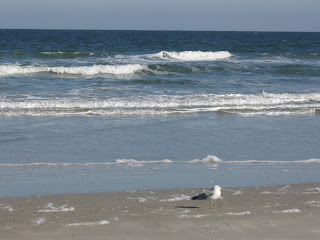 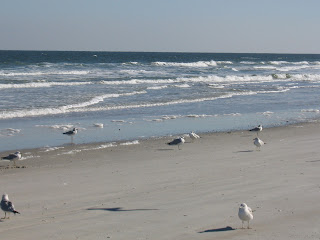 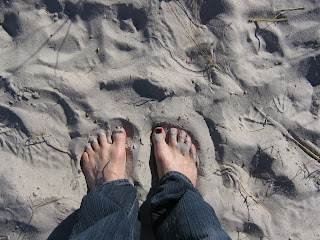 I think that about does it for the month of January.  Thank you again for indulging me.  And thank you all for being the wonderful friends and amazing women you all are.  I think of you and each of your unique strengths that you each possess.  I am blessed to have you in my life – and for helping me push through the crap and the muck to be the blooming lotus (someday).  I ran across this quote, and thought it certainly held true for the friendships we have with each other:  “A true friend knows your weaknesses but shows you your strengths; feels your fears but fortifies your faith; sees your anxieties but frees your spirit; recognizes your disabilities but emphasizes your possibilities.”  – William Arthur Ward